Look for the Door that has Opened

Steve Bordley was a real estate agent in Scottsdale, Arizona, when he had an accident that left him wheelchair-bound for 2 years.  During that time, his blood pressure and cholesterol went up and he gained a great deal of weight.  Returning to work did not bring any improvements to his health so he designed a solution for himself that has become a full time business.  He mounted a desktop on a treadmill that he already owned, and walked on it slowly while making phone calls and working on a computer.  In six weeks, his back pain resolved, his leg muscles regained much of their strength and he lost over 11kg.  In 2007, he founded TrekDesk and now ships the mountable desktop all over the world.

In 2009, Daniel Sharkey was laid off as plant manager of a tool factory after nearly 30 years with the company.  Tinkering in his garage, he designed his own adjustable desk for standing, which he named “the kangaroo desk” because “it holds things and goes up and down”.  His wife, Kathy, suggested that other people would also benefit from “that kangaroo thing” and today, Daniel Sharkey’s company, Ergo Desktop, employs 16 people at its assembly factory in Celina, Ohio.  Sales of its several kangaroo models have quadrupled in the last 12 months and he ships tens of thousands of workstations a year.

Apart from reinforcing my message of the last two months about the benefits of regular movement and breaking up prolonged sitting, these two real-life success stories illustrate that what sometimes looks like misfortune, can actually spur us to greater achievements than we ever imagined.  The key is to choose our perspective – to realise that all the events, circumstances and happenings in our lives are neutral – until we label them as good, bad, frustrating, disastrous or motivating.  We always choose what we make things mean, whether we’re aware of it or not.  Hamlet proclaimed, “Things are neither good or bad but thinking makes them so.”

This is not about forcing ourselves to think positively, but choosing to think constructively.  It’s about recognising that our greatest power as human beings is to choose the meaning we give to whatever we’re experiencing.  Nor is it about finding the correct meaning, but a meaning that empowers us rather than crushes us.  Steve and Daniel could both have labelled their experiences as disasters –a debilitating injury on the one hand, and unexpected unemployment and lack of income on the other.  Yet they both chose to ask: “Where could this lead?  What doors might this have opened?”  When a door closes in your life, look for another door that might have opened –even just a crack.  Often, as Alexander Graham Bell noted, “We stare so long at the door that has closed, we miss seeing the door that has opened.” 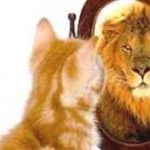 We Get What We ExpectMindset

Find meaning in your mistakesMindset