Fat is in the air

We’ve known for a long time that air pollution is not good for our lungs. A recent study by scientists at Duke University in North Carolina revealed that breathing air with high concentrations of ash, dust and other chemicals increases insulin resistance, inflammation throughout the body, and fat deposition around the abdomen! In other words, air pollution raises the risk of diabetes, heart disease, dementia and a wide range of chronic diseases.  Earlier experiments involving 18 year olds in California found that people who lived in areas with heavy traffic had a greater body fat percentage and more sluggish metabolism (how the body uses food for fuel).

Experiments with rats exposed to diesel fumes found the longer they breathed the polluted air, the fatter they became, the more inflammation they had in their brains, and the unhealthier they were in general.

Needless to say, this is alarming news. We can’t all suddenly move out of the cities and live in airtight bubbles cut off from pollution. But if we’re aware of the seriousness of breathing unhealthy air, we can make a conscious effort to spend as much time in nature as possible. What can you personally do to reduce your exposure to air pollution? Is there somewhere you can escape to for a regular dose of fresh air?

The overriding message of this and other studies is that everything in our lives is interconnected. There isn’t one defining factor that makes us healthy or unhealthy. It’s the sum total of how we live our lives. Every small step in a positive direction tips the scales in favour of better health. 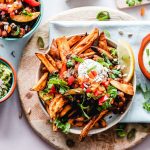 Not all Calories are equalCalories